A downloadable game for Windows and macOS

As someone who doesn't own a car, you depend on the highway bike lane—one that's highly maintained and keeps all bicycle users safe from any harm that may come their way!

I played this for several minutes and got NOWHERE!

Like no matter how many times I played I can't even get 1 mile in! I always die because of some reason or another!

Not to mention just touching 1 thing kills you! No matter how slow you where going, No matter what you touch just 1 hit and you die even if you are moving at the slowest speed possible!

That wouldn't be so bad if these drivers are smart but no! These are the world's worst drivers I have ever seen since The Simpsons hit and run! They just crash into each other and break the laws of physics by FLYING through the air which although is hilarious that laughter dies out the moment you realize that if you sit and laugh at the havoc the drivers get into and have bad luck you just get killed by a driver even if you didn't even start moving!

Which even if you start moving it is unpleasant to even do! I thought the fishing controls in Fishing Vacation was bad enough with how much you have to mash the buttons to reel in a fish but this is just taking a dump! You have to mash the left and right arrow keys like there is no tomorrow just to get anywhere and control your movement with A and D! I had to constantly switch what hand I was using to move just to avoid carpel tunnel! Not to mention the turning is just terrible because instead of having proper turning like a bike would normally have it instead pivots the bike causing it to spin around like it is on ice and it is horrible to do and turns on it's own even if you don't touch A or D!

Honestly? This game is only for players that have a lot of patience because no matter how long I played the furthest I got was half a mile.

Had some serious fun and a ton of laughs with this game. Loved my time with it and would definitely recommend!

I love this game!
Such a fun and hilarious experience, yet very simple and not so complicated. I truly had a blast with this one. Great job developer (s) 👏

Reply
IGT100172 days ago(+1)
I am HORRIBLE at games like this, so I didn't get very far in this short video.  That being said I thought it was a lot of fun!  Funny and scary!  I'll likely play this on my own and try to get farther!
Reply
Tusk169 days ago(+1)

The constant crashes while trying to do your outro was the cherry on top, lmao. Thanks for playing!

Oh wow!  you watched all the way to the end!  That is an AMAZING compliment for me!  Thank you SO MUCH!  You just made my entire day brighter!

I JUST WANT TO FEED MY VEGAN CHILDREN WITHOUT ENCOURAGING THEIR CANIBALISTIC TENDANCHIES!!! IS THAT SO MUCH!?!?!?

oh my god this thumbnail LOL

It gets the message across. X{D

I would petition my job for hazard pay. This was so much fun. I really enjoyed it but was horrible at it. Keep up the great work!

Interesting game for sure and it really shows the current state for cyclist. Nice job.

Here's my channel for other games I have played. https://www.youtube.com/c/Levont

The LOOK of this is fantastic. You have certainly nailed the VHS aesthetic. That's what drew me in. And I love how the game seems to be an indictment of insufficient traffic laws and their callous attitude toward cyclists. Thought-provoking subject matter.

In my playthrough, I could only last a few seconds-- some of the obstacles seemed unfair. But I guess that's the point, right? Cool little game, and I can't wait to see what else you come up with!
Reply
queenfaith184 days ago(+1)
good
Reply 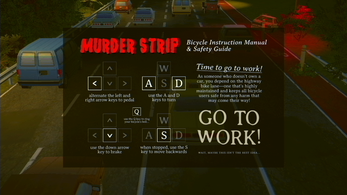 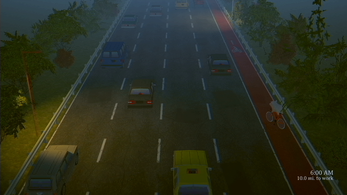